With a background in jazz, Kosmo Sound creates an exciting, danceable and eclectic universe with tight grooves, oriental sounds and spacy sound effects. Improvisations and expansive melodies take the listener on a trip through their cosmos. The sextet has toured the UK several times. That is where the inspiration for the full album Antenna in 2020 arose. The ultimate recognition came when their singles were mixed by dub legends Daniel Boyle and Alpha & Omega and when they played as the support act for Adrian Sherwood, The Twinkle Brothers and Omar Perry.

Seas of Mirth have been stamping their own mark on modern music for the last decade, mixing up styles and genres while also being known for their aquatic twist. Their sonic span comprises areas of psyche, dark funk, jazz, disco, latin and chime pop while comparisons have been made to the likes of Cardiacs, Stereolab, Talking Heads, Parliament, Animal Collective and Frank Zappa. Live, there is a huge emphasis to bring the tunes to life in an enthralling sensory experience made possible with big luminous sea creature props emerging through the course of the set.

With a very special DJ set from...

Gordon & Gillian Wedderburn are the couple behind GW Jazz, a grassroots organization supporting Jazz, particularly emerging talent in London. Through their live event residencies, radio show, selector/DJ activities and clothing brand, they’ve collaborated with and supported some of the biggest names on the London Jazz scene including, Sons of Kemet, Zara McFarlane, Ben Hayes, Nubiya Garcia, Moses Boyd, Lokkhi Terra, Dele Sosimi, Theon Cross, Tomorrow’s Warriors, Collocutor, and Ezra Collective, to name a few.
Celebrating ten years on the scene, they are known particularly for spotting and helping to nurture young talent and their residences are often touted as the place to go to see the next wave of talented musicians. The collectives Nihilism, Invariance, Brother’s Testament and Hypernova are but a few that have performed on the GW Jazz platform.
Gillian & Gordon sets largely parlay the now and next generation of musicians and producers and bring Jazz, electronica, dub, world, neo-soul, lo-fi, afrobeat, Brazilian and more together, combining their Jamaican livity and cosmopolitan London existence.

What is the Handling Charge for?

To ensure tickets are delivered safely and securely and to keep the price as low as possible for you, the ticket buyer, Ridley Road Social Club generally uses our E-ticket system unless otherwise stated.

For this service we charge a small Handling Fee to cover the debit/credit card processing fees, customer services, processing and distribution of tickets and our secure server costs. We always try to keep these costs to an absolute minimum. If you feel at any time that our prices are not fair or competitive we'd be happy to hear from you.

If you have ordered physical paper tickets there is a further Delivery cost added to cover the delivery of your order through the Royal Mail network.

We always endeavour to keep these costs as low as possible to merely cover the costs of postage. We only charge you one Delivery cost per order so if there is a big group of you recommend purchasing larger amounts in one order.

When you purchase tickets through Ridley Road Social Club, the full face value of the ticket is shown. This price is the price set by the event promoter and we pay this full amount to the promoter without any deductions. 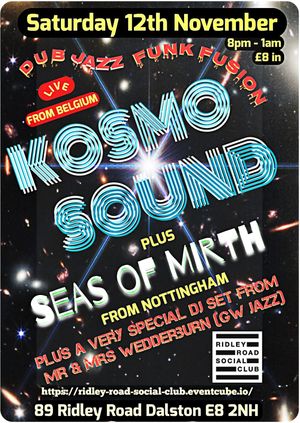